CFA-webinar: Russia's Invasion of Ukraine & It's Impact on Macro and Assset Allocation

Russia’s invasion of Ukraine is first and foremost a humanitarian tragedy. It brings with it a host of crucial challenges and questions unrelated to finance. However, it also emphasizes how the world’s ever-changing geopolitical landscape can have critical implications for financial markets.

CFA Society Norway, in collaboration with our sponsor Fidelity International, invites you to a virtual meeting with the Global Head of Macro and Strategic Asset Allocation at Fidelity International, Salman Ahmed. He will share his view on how Russia’s attack on Ukraine will change the global macro landscape as well as how it might impact asset allocation choices and portfolio construction. How will global trade and growth be affected? How will inflation impact our asset allocation choices?

Salman will answer questions live during the last 15 minutes of the webcast – kindly submit during the event, using the Q&A functionality. 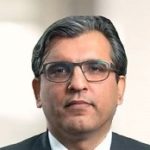 Salman Ahmed
Global Head of Macro and Strategic Asset Allocation @Fidelity International
Salman Ahmed joined Fidelity in August 2020 as Global Head of Macro and Strategic Asset Allocation. Previously, he was co-chair of Global Investment Committee and Chief Investment Strategist at Lombard Odier IM (LOIM). Before spending nearly 8 years with LOIM, Salman was head of Global Macro at Edf trading between 2009 and 2012. He also spent nearly 5 years with Goldman Sachs International as a global economist within the global macro team. He began his career in finance with Watson Wyatt (now Towers Willis Watson) in 2001. Salman holds a PhD and MPhil in Economics & Finance from University of Cambridge. He obtained his undergraduate degree from Lahore University of Management Sciences, Pakistan, in 1999.